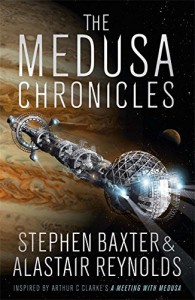 I struggled with this until nearly the half-way mark, considering quitting a couple of times. I'm used to slow starts from Reynolds' solo books but this one wasn't so much slow as terribly disjointed, making it difficult to get involved with the story. Abrupt leaps in the passage of time with very little apparent connective tissue stopped it feeling much like a novel at all and had me wondering if a "story suite" (as Le Guin would call it) of shorts would have been a better idea. The second half works more like a traditional novel narrative and allowed me to connect more to characters and see what all the preceding vignettes were for, thus rescuing the book for me.

I haven't read any Baxter prior to this but I can see the influence of Reynolds all over it.