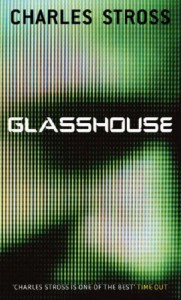 This could have been really dull because there's really nothing new in it by way of SF ideas; it relies on wormholes/teleporting, nanobots, uploading your mind then downloading it to any body you fancy, editing your memories in the process, and not much else. You can find all these elements in many other places. The odd thing is that this doesn't necessarily matter. Individual authors' speculations about where these scientific or engineering advances might take humanity physically and culturally can be radically different and the wider themes they may wish to treat can be equally diverse. Usually the problems lie with a single author trying to mine out the same vein in a zillion sequels. Ultimately certain ideas get tired no matter who is writing them and it's time for the genre as a whole to move on. We are perhaps approaching that point with some of these technological ideas, at least as ends in themselves, but this particular novel feels pretty fresh. If Alastair Reynolds wrote another book in which forgetting one's own past drove the plot as much as it does in this book I'd probably go nuts, but here it works fine.

And that's the situation; self-inflicted amnesia bloke is the victim of an attempted assassination and he runs off to a bizarre psychological/archaeological experiment to hide while he gathers his wits...but much is not as it seems and an exciting 'friller ensues. At least, it ensues after the slightly over-long scene-setting part where we get a future citizen suffering past-shock as he stumbles around a fake 21st Century trying to figure out how those quaint barbarians (i.e. us) coped with such an irrational, inefficient and technologically and socially backward society. Once that bit is past...well, I read it at break-neck pace and whilst I guessed some of the plot points ahead of time, greatly enjoyed it. I was slightly disappointed with the denouement which I felt was handled too hastily but over-all I think this is as good as anything I've read by Stross and better than several.