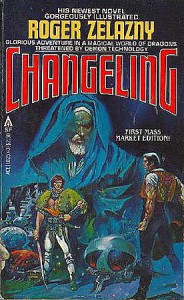 This is one of Zelazny's openly comic efforts, poking some fun at fantasy novel cliches but also showing a number of more serious themes that will be familiar to readers who have read Zelazny more widely than just the Amber series. For example, opposites seperated and in tension (magic and technology, as in Jack of Shadows) and arch-villians who don't start off intrinsically evil. The latter is perhaps the more interesting in this case; the development from mis-understood well-meaning kid genius to megalomaniac adult is very convincingly handled and not something generally tackled in high fantasy. This also might seem familiar from Jack of Shadows, but this time there is a seperate protagonist who contrasts the eventual antagonist in many ways.

It's a fun read and neither the best nor the worst of Zelazny.
Tweet