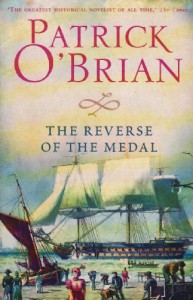 This is the eleventh in the Aubrey/Maturin series of novels, which stretches to twenty volumes completed in the author's lifetime and a 21st published posthumously having (I assume) been finished or at least tidied up by another.

Aubrey and Maturin sail around a bit then arrive in Britain, where Aubrey gets himself into a spectacular mess, based on an incident in the life of Cochrane. Maturin, meanwhile, attempts to figure out why his boss is being politically sidelined and to get Aubrey out of the mess.

Here's the problem; this is mostly familiar - rather too familiar. O'Brian wrote very well and created vivid characters but by now he is struggling to find original things for them to do. The opening half of this book is weak - the first 60 pages are spent often re-capitulating events from the immediately previous and earlier volumes and the remainder on a naval pursuit that is now in danger of collapsing into cliche and tedium because it's been done so many times before just within this series! Matters are saved only by the quality of the prose.

The second half sees an astonishing space given over to a cricket match and as invariably happens when the post captain and Doctor arrive in Britain we get an update on their romantic careers. Maturin's is beginning to resemble a farce. Then the bit that simply has never been done before occurs!

Without going into spoiler territory, I shall only say that somehow O'Brian always does find something that is truely a new situation for one or both major characters. In book 11 it is restricted to the last quarter, at most third, of the book, though. He also often finds a cliff-hanger that leaves you with that urge to find the next one in the series...does so with this volume.

So...is 1/4 of the book enough reward to wade through the other 3/4? Will the next volume be better - maybe 1/2 that one will be interesting? I've been stuck in an internal debate about where to go with this series for some time: Should I just give up? Should I cut down to 1 per year? (I've been reading 2 per year for the last 2-3 years.) Should I put Aubrey and Maturin on the back-burner and read some of his other fiction? (The Road to Samarkand was fun - the only book by O'Brian I've read that isn't part of this series.)