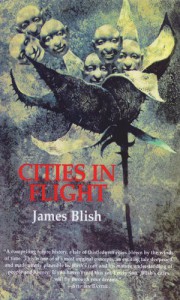 This is a review of the first two books of the quartet. The first is in a style I have come to expect from Blish; a rather high brow and deep philosophical discussion masquerading as an eventful piece of pulp. Dubious science fiction is carried off by a presentation indebted to a knowledge and understanding of real science, unlike many modern approaches where any attempt to explain the nature of advanced technology is not forthcoming. The book does take oblique looks at two common Blish themes: religion and the search for knowledge, which are closely interwoven in Black Easter, A Case of Conscience and Doctor Mirabilis. One point he argues for is that giant government funded research projects will eventually fail to produce anything of significance simply because they will become divorced from the normal open scientific discussion. He argues that only the military would be able to afford the projects and they would apply strict security measures so that no knowledge would be transmitted outside the government. No brilliant researchers will work within one, as the security risk is too high. The rest of the scientific community will apply no deep skepticism, as it has no access. In fact such projects will cease to be science at all. Blish suggests that the best ideas will exist in the heads of marginal scientists with theories that diverge wildly from the consensus view. This does not appear to have been born out in the years between 1957 and 2000.
Another idea put across is that the West will in effect cease to differ from the East as the drive toward secrecy and security takes away the populace’s privacy and freedom of action and determination. I’ve seen too much evidence of this in both Britain and the USA, where most people, though not as repressed as in the ex-Soviet population were, have no conception of how repressed they actually are by the tyranny of video cameras, phone taps, driving licenses, the police and government.
A minor idea in the book is that mass religion will become more popular, more stridently evangelistic, more fanatical and utterly meaningless. This is being proved true every day across the globe. (The quote about fanaticism being generated not by conviction but by insecurity is a perceptive truth.)
The second novel in the volume is inferior but still proved worthwhile. It extrapolates the technological and geo-political situation presented in the first novel forward another thousand years or so. History has proved that geo-political speculation wrong and the philosophical debates of the earlier work are lacking, however one further point about the pursuit of knowledge is made. A technology exists for stuffing facts directly into memory but teachers are still required in order to promote understanding of the facts and reasoning about them. It seems unlikely that human teachers are going to be uniformly redundant in the near or far future. Blish also suggests that studies of history are of great use to politicians, military strategists and managers. He’s probably right.
All of this is secondary to the not unique idea of a kid of the far future with no evident talent becoming a significant and successful figure in the course of an eventful and exciting narrative. It seems that the idea has existed for a very long time but the idea used to be flung into the far (mythic) past. The story of King Arthur being identified by the Sword in the Stone would be one of the finest and most famous examples. That was set in a mythic past even when the earliest version was written. Perhaps science fiction sometimes takes on the role of modern myth making more profoundly than modern popular fantasy does.