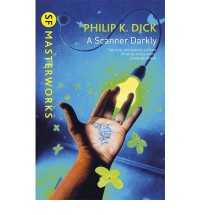 This book is so open to pastiche. Chicks, straights, narks and like that could all do one. So I won't bother; there are a bunch of them on Goodreads already.

PKD here writes a Requiem for a Dream decades before that film came out, showing from a convincing internal viewpoint what the disintegration of a mind through drug abuse might be like. Initially amusing, the continuous sequence of ridiculous conversations and bonkers, apparently incomprehensible events soon palls as the plot seems to go nowhere. But stick around! The back half goes typically PKD crazy as it becomes clear to the reader (but not to our hapless protagonist, despite his growing paranoia) that there are machinations afoot. The last quarter then turns both tragic and startling as one discovers what is really going on. This abrupt turn away from the humourous heightens the tragedy (Romeo and Juliet, anyone?) and results in a powerful culmination to the book, which does for the '60s American psychedelic subculture what Trainspotting did for '90s British heroin subculture.