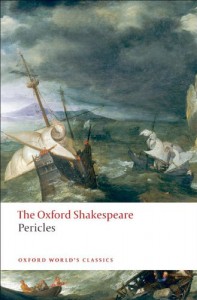 I would guess this is a pretty obscure, rarely performed Shakespeare play these days, but back in his day it was really popular and it was revived quickly later in the 17th Century when the theatres re-opened after the plague had closed them. This shows a fairly big shift in taste, because Pericles is a pretty faithful adaptation of a prose Romance that is akin to Mediaeval Saintly Lives Romances, complete with preposterous plot with numerous ridiculous coincidences, exiled/orphaned/mistaken for dead characters, undeserved suffering and triumphant return home.

I like that kind of tale, just accepting the silliness, and was amused by the goings on; how many times can one person get shipwrecked? How many supposedly dead relatives can you be unexpectedly re-united with? Basically, it's a romp and I'm not surprised contemporary audiences loved it en mass; it's the equivalent of a bad "guilty pleasure" Hollywood movie nowadays.

There's some debate as to whether Shakespeare wrote all of it. Many have noted "marked improvement" after about ~2/5 the way through. Few argue that Shakespeare had no hand in it, these days.

Some people thought it was a very early play, because not very good, but later scholarship suggests otherwise. I suspect that, given that it is actually a late play and very faithful to its source material, Shakespeare, who was then by then very busy running a theatre company (admittedly jointly with others) and acting, had less time to write than in earlier years and needed a new play in a particular hurry.

I suspect modern audiences tolerate the preposterous plots of the comedies because they are too busy laughing but reject the same in Pericles because it's considered "serious" and they can't take it seriously, which conflict leaves them disliking it. But it's a Romance; it shouldn't be taken seriously. The preposterousness is part of the fun and a feel good ending makes one - feel good!

Not all of Shakespeare is profound...