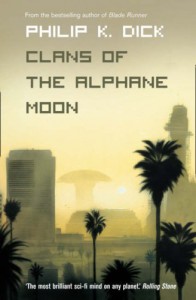 Dick is unique in the field of SF as far as I can tell. Nobody else I've read or even heard of would have thought up the premise for this book, which I'm not going to give away. Yes, it's about a CIA propagandist caught up in an interstellar web of conspiracy, largely through his own foolishness, but no, it's not really about that, at all. It's difficult to talk about the true theme without spoiling the effect, so I will save that for the bit hidden behind spoiler tags.

Before that I will just mention that the opening chapter gives away the theme and in a manner that is pure genius; one of the joys of SF is being dumped in an unfamiliar setting (future/culture shock) and trying to figure out what is going on from the clues in the writing. Done well, great wads of exposition are avoided - but it's all too frequently done badly. This first chapter is a masterclass in how to do it properly and displays Dick's uniqueness in a show-case.

The theme here, as in so many of Dick's books, is mental illness. The idea of exploring what might happen if the inmates took over not only the nuthouse but the entire moon it was built on is pretty radical, as is the speculation that a society that more-or-less functions would arise. It's fascinating to think about and extremely useful in that it gives a reminder that even people with extreme mental health problems are people. Having more than a passing acquaintance with these issues I find this extremely positive and useful - and Dick's attitudes, as expressed here seem well in advance of many folks you might encounter today, despite having been set down back in the 1960s. One interesting observation is that the protagonist, despite bouts of depression and paranoid seeming behaviour is eventually declared sane. Insanity can be temporary and paranoia is delusional. When they're really out to get you, you're not mad for thinking so.

This book, whilst interesting, fast paced, short and readable does have a few small flaws and is therefore not on the top shelf of Dick's work. An important supporting character's motivations are left completely mysterious and seemingly self-contradictory - but it is an alien - should we expect to understand it? The ending also feels a little unsatisfactory because not entirely convincing, character-wise. It is rewarding enough to make it worthwhile despite this, however, just because of the crazy imagination and subtext.