How to be a Wally, Paul Manning 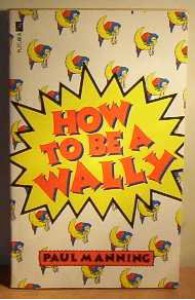 In this book, from 1983, Manning repeatedly points out how hard it is to be a Wally; how much effort it takes. Driving badly in a clapped out Capri with fluffy dice hanging from the rear-view mirror is merely a minimal pre-requisite for the pretender-Wally. Despite all the effort and determination apparently required, Britain had a Wally epidemic in the first half of the eighties. They were everywhere and impossible to mistake for anything else.

But if it was tough then, how hard is it now? Where do you even find fluffy dice now, let alone a Capri to hang them in? Wallies may well be extinct - I haven't seen one for decades. Nerds, yep. Geeks, yep. Wallies? No.

Whatever happened to the Wallies?...Actually I don't care and nor should you - we're better off without them.