The Seeds of Time, John Wyndham 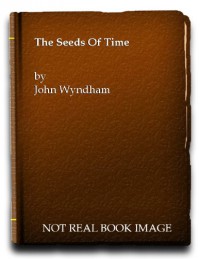 This is a short story collection that is, I dare say, much less famous than Wyndham's novels. It is, however, worth hunting down if you like those novels. As is often the case with short story collections, The Seeds of Time shows greater range than all of the author's novels together (although Wyndham was just one of several pseudonyms used by this author and I haven't read any of the others).

Two themes stand out, though. One is time-travel, which occurs in several stories with a different approach every time, and the other is that it is unwise to under-estimate women - particularly the quiet ones. The latter meshes with the novel, Trouble with Lichen, in which Wyndham wrestles with the thorny issue of how to reconcile wanting a career and wanting children if you are a woman - something that is yet to be resolved satisfactorily in any society, in my view. Wyndham was in tune with the desires of 1950s British women and championed their cause in his writing quite often. Which is not to say all his female characters were decades ahead of their time or necessarily terribly sympathetic either; some of them were thoroughly conventional and some of them do really nasty things. One should not expect that even a forward thinker on such issues, such as Wyndham clearly was, would write characters that closely resemble contemporary women in their attitudes, either. I mean, can you argue that Hardy was not a progressive when it came to women's rights? But his characters don't closely resemble people of the 1950s any more than Wyndham's resemble people living 70 years later. I doubt current authors are going to accurately guess what the people of 2090 will be like, though some of them provide an entertaining and thought provoking time with their guesses.

But back to the stories at hand: They are a variable lot, with the first being weak and the last being almost poetic, some being comic, others ironic. Irony serves the SF short story writer very well, particularly when mixed with the sting-in-the-tail approach and the stand-out story of this collection, Survival, is a prime example; almost a British Ray Bradbury story, if you exclude Bradbury's mastery of imagery.

Anyone who ever liked a Wyndham novel should find and read this collection and fans of the SF short story genre in general should do so, too, as there are a few gems here that deserve to be much more widely known.